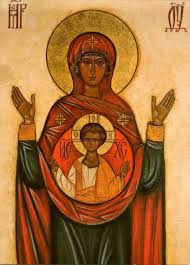 “It has become a commonplace to hear someone say, “I’m spiritual but not religious.” Most people have a general understanding of what is meant. I usually assume that the person holds to a number of ideas that are considered “spiritual” in our culture, but that they are not particularly interested in “organized religion.” I understand this, because organized religion can often be the bane of spiritual existence.

I am an Orthodox Christian – which is not the same thing as saying that I have an interest in “organized religion.” There is much about organized religion that I dislike in the extreme, and I occasionally see its shadow seep into my experience within Orthodoxy. But I repeat unashamedly that I am an Orthodox Christian and admit that one clear reason is that I am not very “spiritual.” Without the life of the Church and its Tradition – I could easily drift into a shapeless secularism – living a mediocre existence, marking time until my time is done.

The shapeless contours of spirituality often reflect nothing more than the ego within. How can I escape the confines of my own imagination? It is, of course, possible to ignore the question of the ego’s input and be satisfied with whatever we find comfortable as our “spirituality.” But, as noted above, I do not think I am an inherently “spiritual” man; I am a sinner, for sure.

The Church is spiritual – indeed it is far more spiritual than “organized.” It is standing in the midst of the holy (whether I am aware of it or not) and yielding myself to that reality that largely constitute my daily “spirituality.” I pray and when something catches my heart, I stop and stay there for a while.

In earlier years of my life, growing up as a Roman Catholic, I learned about a liturgical phenomenon known as the “guilty secret.” It referred to the extreme familiarity that grows up between priest and “holy things.” Holy things easily become commonplace and their treatment dangerously flippant. More dangerous still, is the growing sense of absence in the heart of a priest as the holy becomes commonplace and even just “common.” Of course the things which God has marked as “holy” are just “common.” A chalice is holy though it is only silver or gold (still “common” material). God uses common things in the giving of grace.  As a Priest, I pray that I do not find the things of God, common!

The “guilty secret” can afflict anyone. It’s the old phrase, “Familiarity breeds contempt.” It is particularly dangerous on account of our secular culture which holds most things in equal contempt. Things are only things within our culture, and any value it may have is imputed and not inherent.

This same problem holds true with “spirituality” itself. Words easily revert to mere words; actions to mere actions; ideas to wispy drifts of nothing. I have written elsewhere that secularism breeds atheism. The guilty secret that stalks us all is nothing more than the suspicious voice of secularism whispering, “There’s nothing and nobody there.”

The essential question for us is clearly stated by St. John:

It is the question of Christ’s Incarnation – but, in turn, it is also the question: “Is the flesh capable of bearing the Spirit?” Do we live in a world that is capable of God? There are many, who have partaken of a semi-gnostic spirit within modern secularism, who are not comfortable with Spirit-bearing material. Christ is someone whom we have fenced off, demarcated as a unique event such that He alone bears Spirit. He is the God who became incarnate in a world that was, by nature, secular. His Incarnation would thus be a sign that does not confirm the world in any way, but by its very coming condemns all flesh.

This, according to St. John, is the spirit of the Antichrist. It is as though the evil one had said, “Fine. Take the flesh of this child born of Mary, but everything else is mine, and tends towards nothing.”

The Incarnate Christ is not only God with us, but reveals the true reason for all creation. “Heaven and earth are full of Thy glory.” Nothing is merely anything. Everything bears the glory of God.

Thus my “spirituality” is to learn how to live in a material world that is everywhere more than I can see or know. For such a life I need a guide. Without a guide, a Spiritual Father, I am left to the devices of my own imagination. My parents were not raised in such a situation. They were not teachers in this matter. It is the life of the Church, the way of knowledge that is the lives of the saints that teaches me how to live. They help me eat (or not eat) in a manner that reveals God. They teach me to read, to honor icons, to forgive enemies, to hold creation in its proper, God-given place. I am an Orthodox Christian. Who else remembers how to live in the world, holding that Christ is come in the flesh?”
Now I understand many who read these words are within this world, especially as danger is approaching, but for us who call ourselves Christian, we are not of this world, though danger is still fast approaching! Where do you live? Who do you follow? Has Christ come to you, in Spirit, in Truth, and in flesh?

Many also confess and state that their ‘religion’, their ‘spirituality’, does not make them in today’s world and state their struggle is of the coming danger, flesh and blood.

This is not me, for as an Orthodox Christian, I will put Jesus Christ first above this world and danger; Though I will continue to train and prepare and pray! For I live in this world, I am just not of this world!  Pray for me!

I am a Priest with ROCOR.
View all posts by padrerichard →
This entry was posted in Uncategorized. Bookmark the permalink.